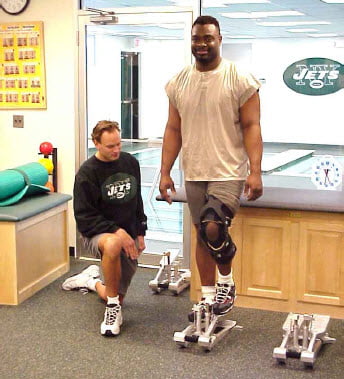 High intensity exercise of short duration has numerous benefits to muscular development. These include stimulation of human growth hormone, an activator of muscle growth, and utilisation of both type I and type II muscle fibers.

In addition, the adjustable resistance and independent responsiveness of each foot pedal allows less resistance for the operative limb during initial rehabilitation.

Without handrails the machine also enhances neuromuscular coordination and proprioception required during functional activities. Further the portability of the machine enables increased rehabilitation via in-home therapy.

In addition to the standard protocol they began rehabilitation on the X-iser® Machine in a seated position as soon as 60 degrees of flexion was achieved.

Once the subjects had quadriceps control and could do a straight leg raise they began using the X-iser® Machine in a specialised standing position (go to “Demos” to view “Short Burst Stepping”). Initially subjects supported themselves using parallel bars, a table, or a walker.

When the athletes were comfortable on the machine they utilised a doorway for balance and support, but only if necessary. The athletes began with four, 30-second intervals at a sub-maximal effort and progressed to 1-minute intervals at maximum effort.

Once independent with the machine, the subjects began home-based SIT that consisted of four, 1-minute intervals at maximum effort with at least 30-minutes rest between intervals.

At four weeks an additional interval-training program was incorporated into their rehabilitation in the training room. The athletes maintained the home based SIT program on the other days.

All athletes achieved independent use of the machine by three weeks and had excellent compliance with the machine.

At 12 weeks full range of motion was achieved & all girth measurements were within 2.5 cm of the uninvolved thigh.

Isokinetic testing was within 20% of the uninvolved knee at 16 weeks.

Subjective fitness level was excellent at 12 weeks and none of the athletes complained of patellofemoral pain at six, 12 or 24 weeks.

A significant amount of the quadriceps hypertrophy and strength was attributed to the unique hydraulic system and specialised form.

Together they obtain a simultaneous concentric and eccentric contraction of the opposing legs resulting in no half-cycle recoveries typically seen with other stepping activities. This study and numerous case studies have demonstrated cost effective benefits to ACL rehabilitation and overall cardiovascular fitness using the X-iser® Machine.